Organized by 1708 Gallery, InLight Richmond is a free, public exhibition of light-based art and performances. Each year, InLight Richmond features performances, sculpture, video, and interactive projects that illuminate pathways, walls, sidewalks, green spaces, and kicks off with the Community Lantern Parade. CodeVA was pleased to be asked to participate in InLight Richmond as a community partner.  Visually appealing light based art installations may not be what comes to mind when thinking of equitable computer science education, CodeVA’s art integrated student programs made a perfect match for InLight. A team led by CodeVA’s Children’s Programming Director Maggie Smith came up with the concept of a 1980’s style video game arcade. 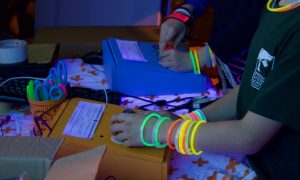 Patrons get hands on with CodeVA’s 1980’s style video game arcade at InLight Richmond 2017, featuring video games created and coded by our students in our Game Maker after-school program.

The arcade featured video games created and coded by students in CodeVA’s after-school Game Making program. Game Making is a great way to introduce students to coding using a block based visual coding language called Scratch. “With Scratch, you can program your own interactive stories, games, and animations — and share your creations with others in the online community. Scratch is designed especially for ages 8 to 16, but is used by people of all ages.” Video games are only half of the experience of a video game arcade, what would the 1980’s have been without great music, and fortunately CodeVA does that too! Every summer CodeVA offers EarSketch, a class that teaches music production and songwriting techniques via computer coding. Over the course of the two weeks class students learn basic music production and computer coding concepts, as well as the history behind music formats from LP’s to MP3’s, and sample based music production. For this portion of the exhibit CodeVA staffer, and EarSketch instructor DJ Hoody was on hand to spin the student’s musical creations mixed in with 80’s hits by Michael Jackson, Duran Duran, Cyndi Lauper, Madonna and more. 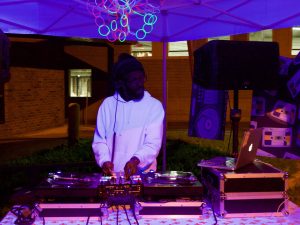 InLight Richmond was a great fun for the whole family event, and CodeVA were honored to have been invited by 1708 Gallery to participate to help us further our mission of bringing equitable computer science education to Virginia’s students. For more info about Game Making or EarSketch contact Children’s Programming Director Maggie Smith at [email protected] Special thanks to our volunteers without whom this exhibit would not have been possible:  Sharon Williamson, Judy Fitzpatrick, & Doug Fuchs. All photos in this post by Doug Fuchs. Extra special thanks to Maggie Smith, Zach Mulcahey, and Della Sigrest for their tireless work on bringing this to life. 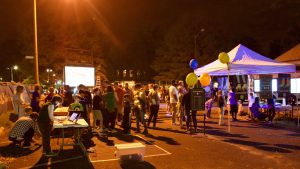 A view of the crowd and CodeVA’s 1980’s style video game arcade at InLight Richmond 2017. 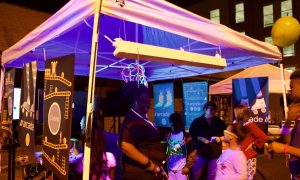 CodeVA’s 1980’s style video game arcade at InLight 2017 was buzzing with activity as visitors competed for the high score.

Patrons get hands on with CodeVA’s 1980’s style video game arcade at InLight Richmond 2017, featuring video games created and coded by our students in our Game Maker after-school program.