A New Way To Support Girls In STEM

In the past 10 years, job positions in Science, Technology, Engineering, and Math have grown at three times the speed of Non-STEM jobs. This trend is projected to continue for the next ten years, and American universities aren’t producing enough qualified graduates to meet the demand. To remain competitive in global markets, America must expand its workforce of capable STEM professionals.

Women make up 57% of American college graduates, but account for less than 25% of positions held in Science, Technology, Engineering, and Math. STEM Education Researchers agree that bolstering the number of women in STEM would significantly increase our nation’s pool of workers, improve diversity in the field, and potentially solve overlooked problems. So why are there so few girls in STEM?

Before age 12, both girls and boys show an equal interest in STEM topics. In elementary school, 66% of girls and 68% percent of boys report liking science. In middle school, however, girls’ confidence and interest in STEM plummets- despite demonstrating abilities equal to their male counterparts. In fact, high school girls’ GPAs aggregated across science and math are on average higher than high school boys.

This discrepancy is due to outdated stereotypes, unconscious bias, cultural and media portrayals, and the subsequent misguided perceptions young women internalize about themselves.  By eighth grade, girls are only half as interested in STEM as male students.

Full STEAM Ahead is an exciting part of Code VA’s initiative to integrate Computer Science in Virginian classrooms. Our mission is to empower and enrich young women in their pursuit of STEAM. Our program complements CodeVA’s emphasis on integrating CS with the arts to increase participation by broadening access. We envision a world where girls have the confidence, resources, and support they need to blast Full STEAM Ahead!

Research has proven that in addition to support from parents and teachers, the best way to keep girls involved in STEM is to encourage and expose them to activities and role models from the industries. We expand participatory pathways for middle school girls by offering choices of hands on workshops led by diverse women working in the fields. During workshops, our role models synthesize disciplines and creativity through STEAM: Science, Technology, Engineering, the Arts, and Mathematics. 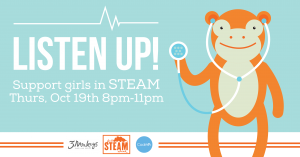